The wedge bailer
The wedge bailer is essentially an obstruction to the flow of water under the hull. The flow round this obstruction is similar to the flow of air over a moving car. The flow is deflected and accelerated and, in accordance with Newton’s Laws, this acceleration is accompanied by a decrease in pressure. With a wedge shape obstruction, the lowest pressure is in the region behind the wedge. An aperture in the back of the wedge connects this low pressure region to the inside of the hull. This aperture is usually fitted with a non-return flap valve. Now, as the boat speed increases the pressure in the low pressure region falls. When the pressure is sufficiently low, any water in the dinghy is ‘sucked out’ through the aperture. At low speeds the non-return valve prevents water flowing into the dinghy. 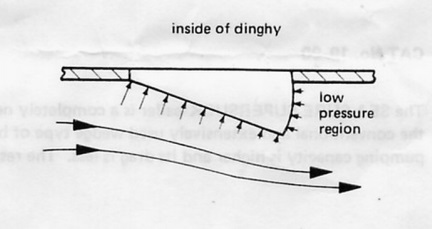 The supersuck bailer consists of an easilyretractable duct on the underside of the dinghy. As the dinghy moves forward, water flows through this duct. The passage inside the duct first converges and then diverges — in effect it is a ‘venturi’. The flow accelerated in the convergent section and its pressure falls. It is then decelerated in the divergent section and the pressure increases again. The narrowest part of this convergent-divergent passage is called the ’throat’. This is the point where the water velocity is a maximum and its pressure is a minimum. There is a passage from the inside the dinghy to this throat. If the pressure at the throat is less than the pressure inside the dinghy, water will be extracted. The design of the supersuck has been investigated theoretically and tank ested in the laboratory to achieve maximum performance. This has resulted in a pressure at the bailer throat far less than that behind a wedge bailer operating at the same boat speed. This gives the supersuck bailer its outstanding low speed characteristics. In fact it has been found in practice that the low speed performance of the supersuck bailer is so good that a non-return valve is not needed. 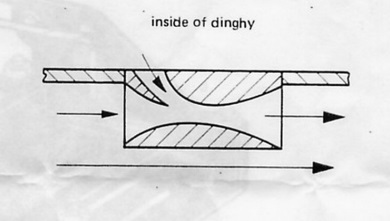 Performance comparison; operating speed and pumping capacity
The diagram shows the actual measured performance of the supersuck bailer and that of a popular wedge bailer of similar size. This illustrates the lower operating speed of the supersuck bailer and its greater pumping capacity at all boat speeds. At a typical speed of 3 knots, two supersucks will get rid of a hefty 0.25 litres/sec (a bucket full every 35 seconds) whereas the wedge bailer has not even started to operate! These figures are typical. They vary somewhat with the draught of the boat and with the class of boat. They may even vary slightly with different locations of the bailer in boats of the same class. 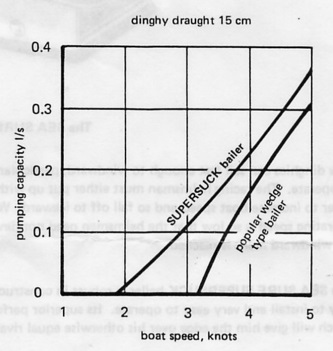 Drag
Drag is the force exerted between an object and the fluid flowing past it. This force opposes the motion and slows it down. With the wedge type of bailer most of the drag force results from the pressure forces acting on the wedge. The high pressure forces act on the forward facing surfaces and the low pressure forces act on the backward facing surfaces. The net result is a backward force or drag. The lower the pressure behind the wedge the lower will be its minimum operating speed but the greater will be its drag. This is a fundamental but unfortunate feature of the wedge type of bailer. However. with the supersuck bailer, the carefully contoured divergent exit passage acts as a diffuser. The flow is decelerated and the pressure increases. The pressure behind the bailer is essentially the same as that in front and the drag due to pressure forces is very small.